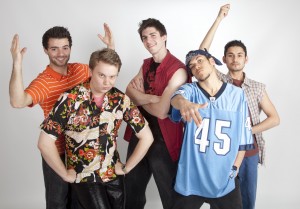 Celebrating and having some fun with the followers of boy bands and Christianity, Clinton Area Showboat Theatre’s “Altar Boyz” succeeds in entertaining both without offending either.

You’d be hard-pressed, in fact, to be offended by director/choreographer Patrick Stinson and the five talented young men in the cast, who deserve some of the loudest laughs and heartiest applause of the year so far.

The Showboat becomes the scene, albeit set in New York, of the final concert in the Altar Boyz’ “Raise the Praise” tour. The five musicians are both squeaky-clean and “street” as they beg the audience to hang with their holy homeboy.

Juan is recovering from being sent away for “exhaustion” while Mark fights his latent attraction for oblivious group leader Matthew. Chambliss plays the role as a hybrid of Ben Stiller and “Saturday Night Live’s” Andy Samberg while Cowing plays Mark as a tortured soul. Bowman masters the accent and has a great delivery while Feldman busts out some legitimate Hebrew dances.

In the concert-style setting, the Boyz observe a countdown of saved souls in the audience, starting at 100 and bouncing down instead of counting down. The Soul Sensor DX-12 (“by Sony!”) also shows images of what the audience is supposedly thinking, from pastoral scenes to “Seinfeld” episodes to Donald Trump’s hair.

Director-choreographer Patrick Stinson put equal amounts of work and fun into the show. The dance moves are straight-up enough to fit in with any N’Sync, Backstreet Boys or Menudo concert, and the young actors have some solid comedy timing.

Music director Tommy Iafrate takes the five singers through some challenging work, but the accompaniment tracks are often too loud and some undoubtedly funny lyrics were lost.

Since this show runs in repertory with “Nunsense,” your chances are limited to give “Altar Boyz” all the praise it deserves.