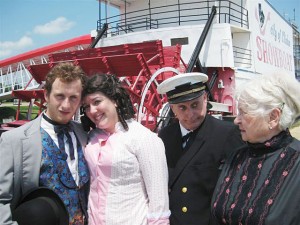 With a cadre of fantastic performances, the Clinton Area Showboat Theatre’s production of “Show Boat” may be the best work done there yet with director Patrick Stinson at the helm.

It’s first-rate work, and it’s difficult to pick who might be better in their roles: Michael Oberfield, as carefree Cap’n Andy; Hilary Mullany as his one-liner-zinging wife, Parthy; Nicole Horton, as their daughter, wannabe performer Magnolia; Nicholas Lee, as her suspicious beau, Gaylord Ravenal; Bradford Rolen, with an impeccable version of “Ol’ Man River,” as Joe; Amber Gray, allowably playing up stereotypes but still wonderful as Queenie; or Jennifer Noble (with a warm “Can’t Help Lovin’ Dat Man”), Mike Detmer and Emily Eisenman as entertainers on the Cotton Blossom.

I was worried initially by seeing as many as 47 people on an admittedly small Showboat stage (not having seen the show before, I was afraid that’s what the rest of the night might entail) but the shining moments in the show came from the smaller, more intimate numbers.

A two-story boat is in the back of the stage, and a rotating set piece with a door in the middle helps the cast through a multitude of locales. A paddlewheel sits in front of one of the Showboat balconies, and some action takes place in front of the other balcony, expanding the reach of the show.